YOU CAN MAKE A DIFFERENCE!

Like you, we have had to face the impact of cancer in our lives and the lives of loved ones. It is our mission at Swing 4 Cancer to bring some hope and joy to families and friends who are struggling with cancer. Join us and individuals like you as we work to change a life today!

By supporting Swing4Cancer you can become a part of the many who are making a difference on a personal level. As with many who are diagnosed with cancer, we share in your story and in the millions like Gracie who, in May of 2011, only 18-months-old, was diagnosed with childhood leukemia. Her father was in Pharmacy School and her mother was pregnant with a 2nd baby. We wanted to do something to help. We came up with the idea to have a run/race in order to raise money to help with the cost of treatments. Not having any background in fundraising, we went to work. We called it Gracie’s Gang. We were supported by approximately 75 people. We called it a success!

Since then, our efforts have increased as well as those interested in joining the team and hopeful to make a lasting difference in the lives of so many affected by this terrible disease. Whether it be through our golf tournaments or via exciting events like the Deluxe Eastern Carribean Swing4Cancer Cruise with Kurt Bestor & Jenny Oaks Baker, we continue to help those families and individuals who have been diagnosed with Cancer and bring some hope and relief on the difficult path they face. Join us today and make a difference in the lives of those who need it most. Swing 4 Cancer is a non-profit 501c-3 organization.

Set sail with the Gents MAY 6–18, 2023 on an Eastern Mediterranean & Holy Land Cruise and help raise money for those diagnosed with cancer! This popular 2-week cruise will visit Rome, the Holy Land, the Greek Isles, and other fantastic destinations…all while enjoying private concerts by the amazing tenors of GENTRI, the Gentlemen Trio.

For more details and to book a cabin on this amazing cruise with GENTRI, please click the button below!

Set sail with private concerts and a meet-and-greet with the father-daughter singing duo Mat and Savanna Shaw! Departing from Seattle, the Royal Caribbean’s Ovation of the Seas® takes you to the beautiful vistas of America’s last frontier. This Alaska Glacier Cruise runs June 10–17, 2022, and a portion of each booking fee in our group will be donated to help those diagnosed with cancer.

For more details and to book a cabin on this fantastic cruise with the Shaws, please click the button below!

A LOOK BACK AT THE SWING4CANCER 2020 CRUISE

Kurt Bestor, Jenny Oaks Baker, and Swing 4 Cancer set sail on Jan 12 – 19, 2020 on a deluxe Eastern Caribbean Cruise to help raise money for those diagnosed with cancer. With amazing support from people like you, we enjoyed a week of fun, musical performances and raised money for our friends in need! 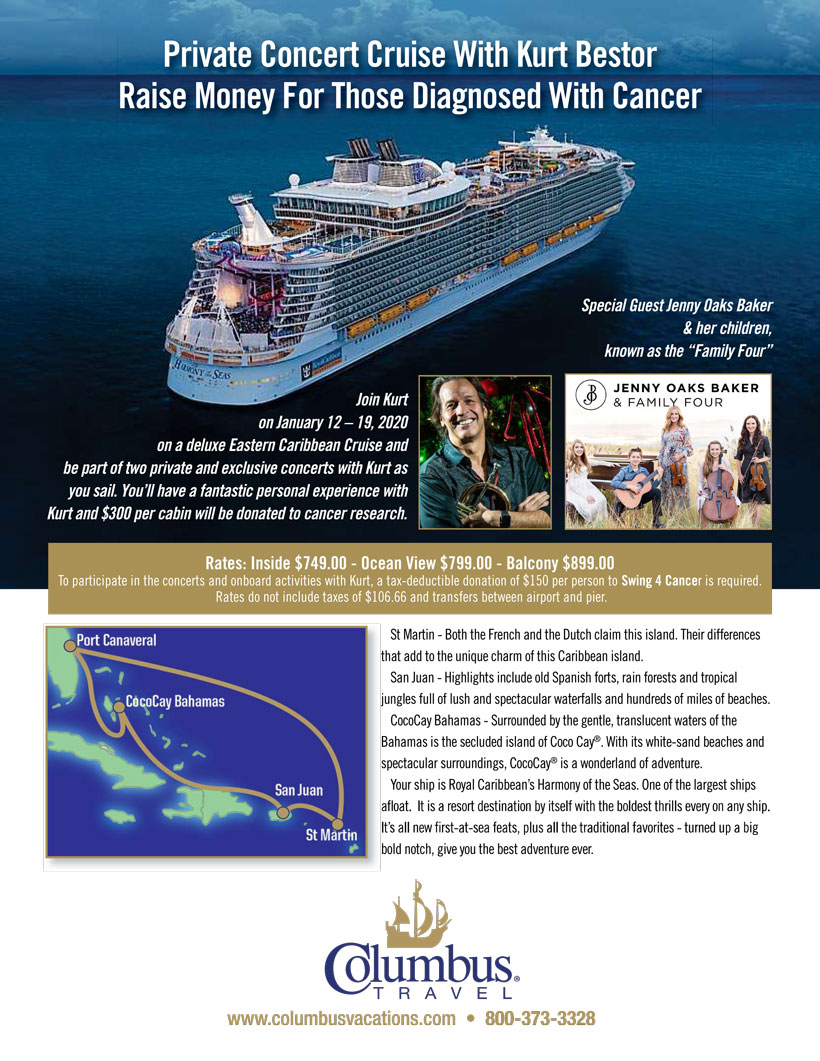 “Finding out your daughter has cancer is a blow that I never saw coming and feel I can barely handle the burden. Thank you so much for your amazing support and donation, it has become the light in our lives that helps us hang on to hope and a future free from cancer!”

“Never stop doing what you are doing! Your help came at a time when we needed it most and reignited our faith in community! Let us know your next event as we want to help make it amazing!”

Here’s what we have been up to at the Swing4Cancer Foundation. How have your donations made a difference? Connect with us via our blog…

We must start NOW

We must start NOW. Now was the time to make a difference, or at least give it our best effort. In May of 2018, the application for the foundation [...]

The big C word hits other family members. 2016 brought more bad news.  My sister was diagnosed with cancer for the second time.  The second time was not a [...]

When life hits you in the face

When life hits you in the face. We have all been taught to serve and give, but sometimes you get hit in the face with reality. Less than 6 [...]